So it was time to head up towards Trafalgar Square.... 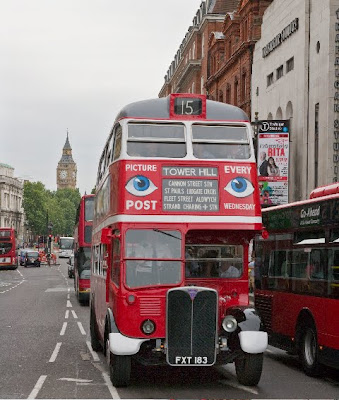 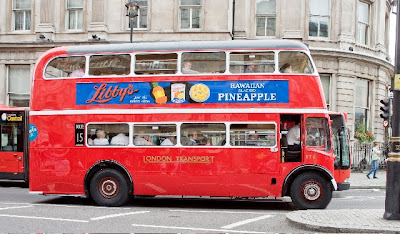 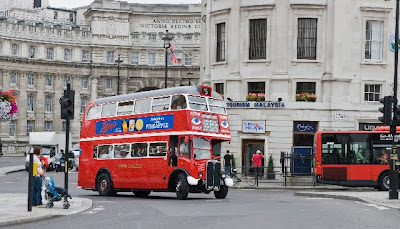 With traditional RT lean she entered the square... 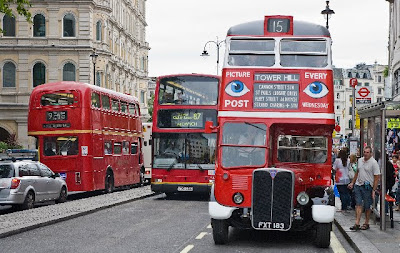 ... She was then pulling up on the 15 stop at Charing X and thus re-entering service for the first time in 55 years. A few enthusiats boarded as well as at least six tourists, who were destined for St Pauls and couldn't believe their luck in getting such a vehicle as their ride. A heritage route 9 passed on its way to Kensington just as 8 set off.. 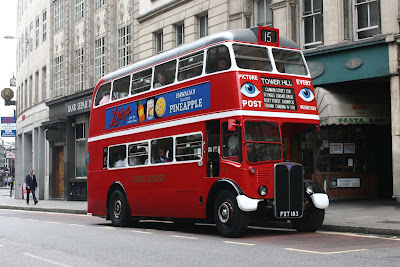 Having dropped off at St Pauls and picked up yet more rather suprised 'regular' passengers 8 made he way ontowards the Tower, seen here dropping off at Cheapside. It is amazing how well such a 70 year old design does in doing the job it was built for. As was said on the day if you compared a 70 year old aircraft and the difference between a modern day jet in the time they take to do the same route the difference is astounding, but with the buses, RT8 had little problem keeping up with its modern day successors. 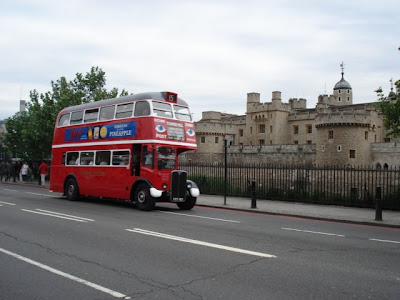 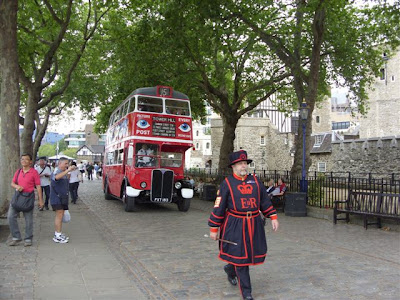 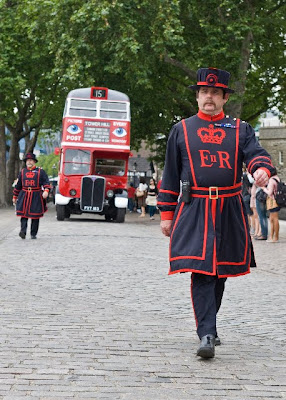 Witnessed by many thousands of tourists it made quite a sight and was starkly different from the skeleton I had been used to visiting in the depth of our 'barn' for the past four years... 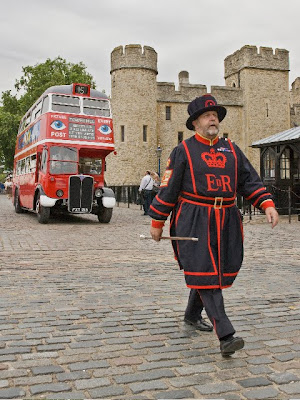 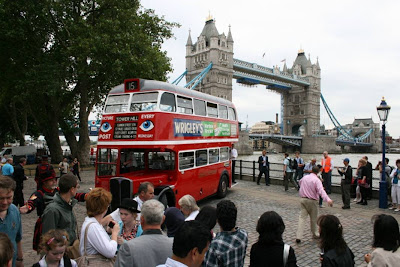 As it was reversed into position, crowds flocked to the vehicle all keen to be photographed in front of it. For me this was a moment of almost relief, not only had the project come to a conclusion but the day of launch which took a lot of planning and that can go wrong so easily had been an enjoyable event. Now watching the smiles on everyones faces from the old to the young as they viewed the vehicle was very satisfying for all of us who had been involved. 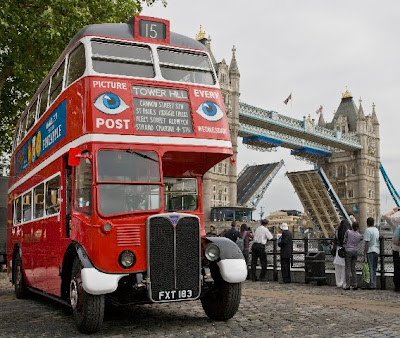 And then just when everyone was saying, what a marvellous day it had been Tower Bridge was opened for a passing ship. A photo opportunity not planned but very welcome! 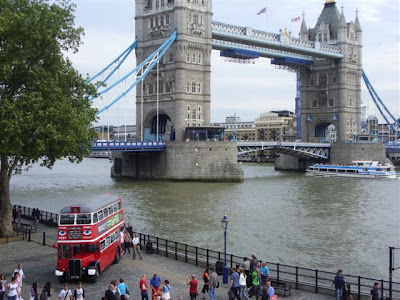 We were very kindly given access to the battlements to be able to get some birdseye views of the bus as the crowds disipated into the Friday evening and we prepared for the final stage of taking her back to Purfleet. 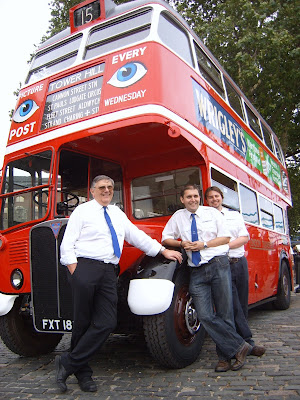 For us as a family it has been an adventure and source of huge pride the interest and enjoyment the return of the bus not only to the road but to the UK has brought to so many people already. So here's a snap of us, Peter left, me centre, and Ross right, enjoying the moment.
So that I guess is a fitting point to end this blog. I will put up some more detailed pictures of the interior detail and follow the last few jobs that she requires on the new new Ensign Vintage Fleet blog at http://ensignvintagebuses.blogspot.com
Look forward to seeing you all there, kind regards and very best wishes
Steve Newman and all at Ensignbus

RT8 The return to London Part 1

OK no apologies for the length of this and tomorrows post as we follow RT8's return to London on Friday. I will be putting the posts up over today and tomorrow and would like to thank all those who contributed photos including, David Thrower, Russell Young, Chris Ruff, Paul Dickson, Bob Stanger, Dean Sullivan and Mark Kehoe. 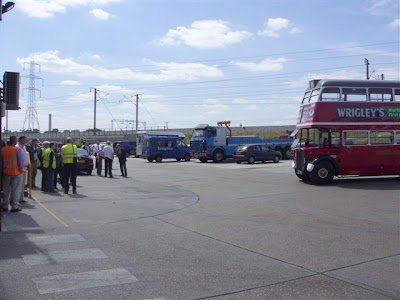 The day was beautiful weather wise as the invited guests and RT8 eyed each other up. We were lucky to have such a wide range of people who had helped or contributed to the project from the beginning, including our guests and friends Molly and Scott who travelled all the way from St Louis, USA to represent the Museum of Transportation who donated the vehicle to us and who were the custodians of it for over 40 years. 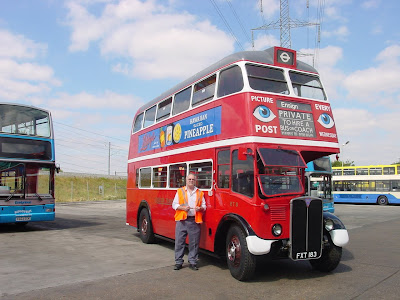 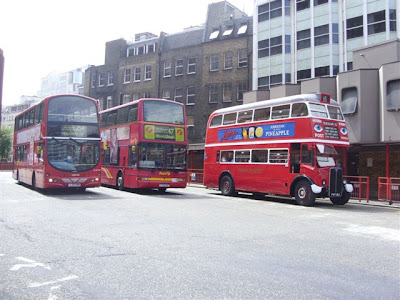 The first stage was to run to London where we would meet the remaining guests who had chosen Central London as opposed to Purfleet to join us. The venue was Aldgate Bus Station, where with TfL permission and a bay very kindly set aside for us RT8 pulled up around 30 minutes ahead of schedule. 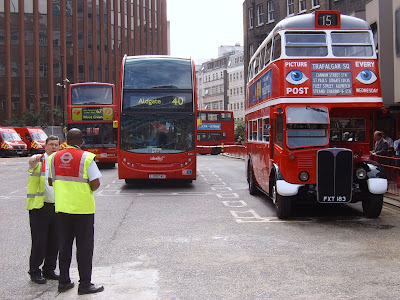 The old meets the new with Enviro and RT side by side. It was interesting how many of the drivers came over to have a quick look over the vehicle, fascinated by how their predecessors had driven the same routes as they do today 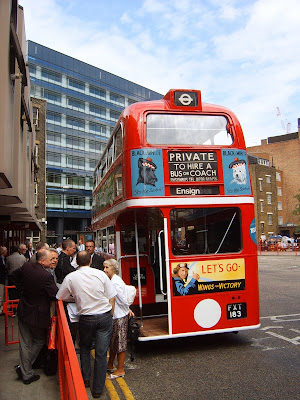 With everybody ticked off on the list it was at 1330 time to move on to the Embankment where a lunch aboard the permanently moored boat the Hispaniola had been arranged. Ross Newman swapped over with Leon Daniels who drove the bus out of Aldgate and onwards to lunch. 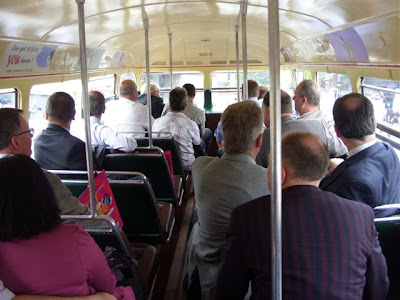 Inside a party atmosphere reigned as RT8 made its way through once familiar streets for it. This was her first time in London for some 50 years and later when she re-entered service on a regular route, the 15, it would be her first time carrying passengers in our capital since 1955. 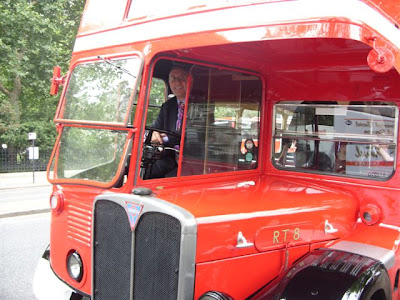 Leon, said he didn't stop smiling all day as this picture bears testament to. Or maybe that was just because he found a parking bay right outside the restaurant... 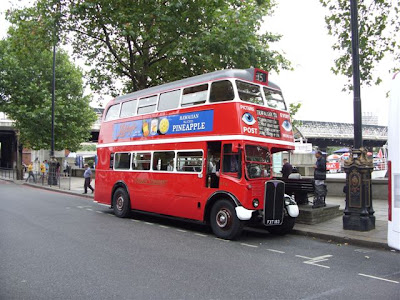 On the Embankment empty whilst everyone had lunch, RT8 drew dozens of tourists and families at one point queing to have their picture taken in front of her. There is something very iconic about Londons older generation of buses, that crosses age, sex and nationality with just about everyone passing commenting, waving or taking a picture. 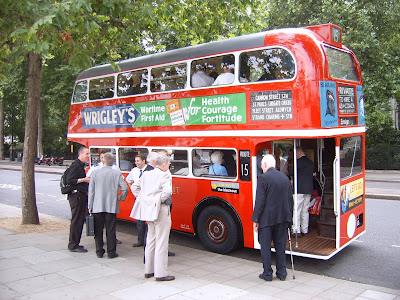 And then it was time to leave the lunch venue and head off to Charing Cross, and a short run on the 15's, which already having so many guests on didn't leave a great deal of room for 'regulars', but we had 12 seats available so the time for her to re-enter was here...
Tomorrow I will finish the update with part 2 but for those regulars amongst you, the new blog following all we do with the vintage fleet will be at this address
Posted by Helena at 9:07 AM No comments: